Welcome to the page for James Joyce's Dublin, A Topographical Guide to the Dublin of Ulysses
by Ian Gunn and Clive Hart with Harald Beck

As anyone who has ever produced a traditional book knows the work is prised from your authorial hands long before the book actually hits the bookshop shelves. So when James Joyce's Dublin finally appeared in 2004 we were already making corrections and amendments to the text as we uncovered further information. We were fortunate in that Thames & Hudson had allowed Ian Gunn to design and typeset the original publication as this had enabled us to maintain a 'live' updated version in the lab.

Over the years we kept Thames & Hudson informed of our improvements in the hope that a new edition would be forthcoming. Sadly Clive Hart died in August 2016 and I regret that he never saw a revision come to fruition. Thankfully all the updates by Clive were already onboard so we have not lost any of his wonderful scholarship. By that time it was also becoming clear that T&H were very unlikely to sanction a new edition. I consoled myself with continued research on No. 7 Eccles street. Then in autumn 2020 with the Ulysses centenary in 2022 on the horizon I tried again with T&H and they confirmed they would not be publishing a new edition. I asked that we be released from our contract so we could pursue other publishers. That request was finally granted and all rights—including the design—were reverted to the authors. Work to complete the revision resumed helped by the concentration induced by the COVID pandemic. Irish and Joyce-centric University publishers were contacted to see if they would accept a new edition of JJD. The response was disappointing—but maybe understandable as JJD is a large format two-colour work that could be seen to have already covered its market. By autumn 2021 it was clear that even if an interested publisher came onboard the time frame would be too short for an early 2022 publication.

The good news was that I had full control of the work and all the rights apart from the selected photographs. So what was important here? It was the research. Clive had always wondered—after all the work—if we would ever get a new edition and I had promised him we would get it 'out there' somehow. Academic publications generate little income for their authors and the key desire is citation and relevance in their chosen arena. While Clive and I both loved the physical written book the price of academic publications has become excessive and restrictive. Thankfully new scholars are now very computer savvy and the option to publish JJD2 on the web now appeared to be the right thing to do and I set about clearing photograph rights for online non-profit publication.

As of mid-January 2022 — Split Pea Press releases the revised edition of James Joyce's Dublin as a 30Mb non-profit PDF eBook. The book is free to own and use but it still contains copyright material so you cannot sell, alter, copy or adapt the contents without permission from the copyright holders. 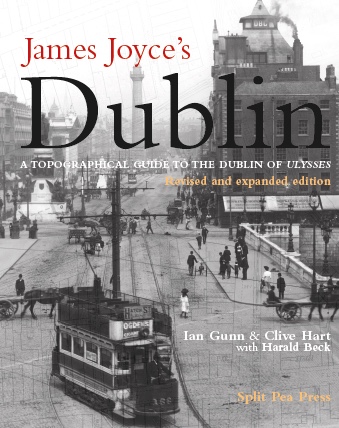